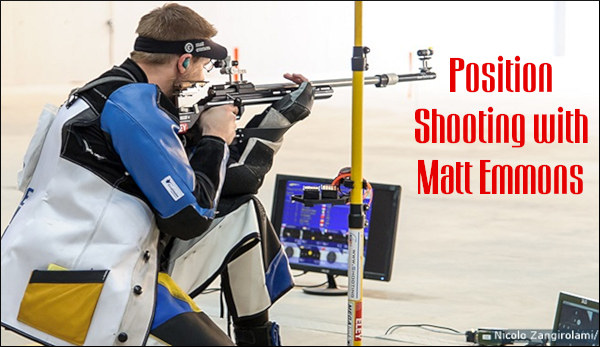 Would you like to try position shooting? Here are some tips from one of the best 3P shooters on the planet, Olympian Matt Emmons. Matt Emmons is one of the USA’s top smallbore rifle competitors in recent decades. Emmons has competed on the U.S. National Team since 1997 and he has represented the USA in various rifle events at four Olympics Games — 2004, 2008, 2012 and 2016. Matt earned multiple Olympic medals: Gold in 2004 in Men’s 50m Prone*; Silver in 2008 in Men’s 50m Prone; and Bronze in 2012 in Men’s 50m 3X40. Although his specialty is Men’s 3-Position rifle, Emmons’ World Championship and Olympic Gold are in Men’s 50m Prone. He usually shoots an Anschütz or Bleiker .22LR rifle, with Eley Tenex ammo.

Here are shooting tips from Matt, courtesy Anschütz. Click image below to launch a large PDF file. Right-click the image and “save as” to download the poster-sized PDF.

Here Matt Shows the Kneeling Position. The other two positions are Standing and Prone. Three Sets of Hardware for Three Positions
You may be surprised to find that Matt often totes three complete sets of rifle parts to important matches — three buttplates, three cheekpieces, and three Centra sights with adjustable irises. Matt told Shooting Sports USA that he travels with “three sets for three positions. Our final is so fast that I need three sets of everything to allow a fast change-over between positions.” Matt carries his gear in an an Anschütz sport bag: “It’s similar to the big Ogio duffels with wheels, but lighter. I’ve worked with AHG/Anschütz for many years and I like their bag because all of my junk fits in it.”

*Emmons’s gold medal at the 2004 Summer Olympics in the prone position came while using a borrowed rifle. In April 2004, just prior to the Olympic Team Trials, Emmons discovered his rifle had been severely sabotaged in the supposedly secure locker room at the United States Olympic Training Center. The precisely tuned barrel and action were heavily damaged by what appeared to be a screwdriver. “I unpacked my gun and I noticed that something wasn’t right,” Emmons said. “Sure enough, somebody had done something to it. I shot it and I couldn’t get the shell out. I said, ‘Something’s wrong here’.” Emmons said it could not have been an accident: “Oh no, no,” Emmons said. “Somebody took a screwdriver and went in.” Emmons went on to the 2004 Summer Olympics, and his gold medal in the prone position event, using his former University of Alaska Fairbanks teammate, Amber Darland’s .22 rifle. He never found out who the saboteur was, but said “I’d like to know so I could shake their hand and say thanks.”