Suppressor Basics — What You Need to Know 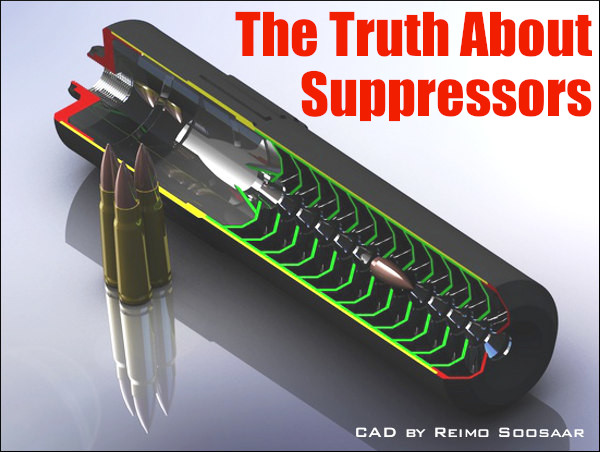 Curious about suppressors (aka “silencers”, “moderators”, or “cans”)? Below you’ll find an informative NSSF Infographic that covers the history, legal status, design, and operation of modern-day suppressors.

Here’s a cool video showing how suppressors work. This video features see-through rifle suppressors filmed with ultra-high-speed (110,000 frame per second) cameras. When played back in super-slow-motion, you can see the flame propagate through the suppressor and the bullet move through each baffle before it exists the muzzle. Check it out!

Suppressor Facts — What You Need to Know

In this infographic, the NSSF provides the history, specifications, benefits and uses of firearm suppressors. Don’t suppress your knowledge!

Suppressors reduce gunfire sound levels by using baffles that contain expanding gasses exiting a firearm’s muzzle when ammo is discharged. Suppressors are similar to car mufflers that were, in fact, developed in parallel by the same inventor in the early 1900s. Well-designed suppressors typically reduce the gun sound levels by 30-35 decibels (dB). Suppressors are becoming more popular even though it still takes many months to get approved. In fact, the number of suppressors registered with the ATF grew by over 1 million from 2011 to 2017. That’s a 355% increase.