Today, 80 years later, it remains important to remember what took place at Pearl Harbor, and to honor those soldiers, sailors, marines (and civilians) who lost their lives in the surprise attack. The tragic memory of Pearl Harbor reminds us that our nation should never be lulled into complacency. The world remains a dangerous place. The nation must remain alert to all dangers, and be prepared to respond to all threats, both known and unknown. As Wendell Phillips said famously: “Eternal vigilance is the price of liberty.”

The Shooting Wire noted: “Today, as we live in another period of uncertainty … we owe our lives and success as a nation to the more than 16 million Americans who left their homes and traveled over the world to protect freedom.” According to U.S. Department of Veterans Affairs, only about 240,000 of the 16 million Americans who served in World War II are alive in 2021. Today, it’s appropriate to remember them and the sacrifices they made for us.

This Editor’s father and uncle both fought in WWII, father in the Army, uncle in the U.S. Navy. A Lieutenant in the Corps of Engineers, my father took part in three landings — North Africa, Sicily, and the south of France. I still have his invasion armband — a treasured memento. Sadly, we lost my uncle in 2019, when he died at age 100. While in the Pacific, he served at the Tulagi Navy Base, where he knew Lt. (JG) John F. Kennedy. Of Kennedy, my uncle told me: “Jack? He was a good kid… and he loved his country.” 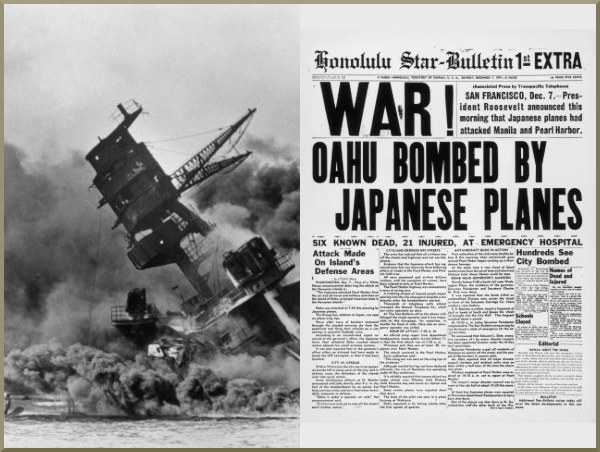 Thoughts on Pearl Harbor, by Dennis Santiago
When I think of December 7th, I remember it is the day my elders began the most difficult four years of their lives. I have seen in their eyes the fear, anger and resolve that come from experiencing what it was like to survive in territory occupied by the Empire of the Rising Sun. My mother had never heard of Pearl Harbor. For her, World War II began on the same day seeing the Japanese bomb a U.S. naval installation called Cubi Point, at the entrance to Manila Bay in the Philippine Islands.

My maternal grandfather never spoke of what horrors he had seen on the Bataan Death March or his years in the prison camps. When I look at my father, I think of my other grandfather’s memories of his son — my father — hanging off the side of a Japanese patrol boat in Subic Bay with an Arisaka pointed at him, forced to give up the catch needed to feed his family….

Time has passed but the poignancy has not faded. Each December 7th, I’m thankful my elders survived because I would not be here to muse about it, had they not. The echoes of their ordeal drive me deeply to make sure that such a thing will never happen again. Whether called the Greater East Asia Co-Prosperity Sphere or some other name made up by the contemporaries of my day, the evil that lurks underneath those who believe their ideas justify the horrors they impose must always be confronted and defeated.