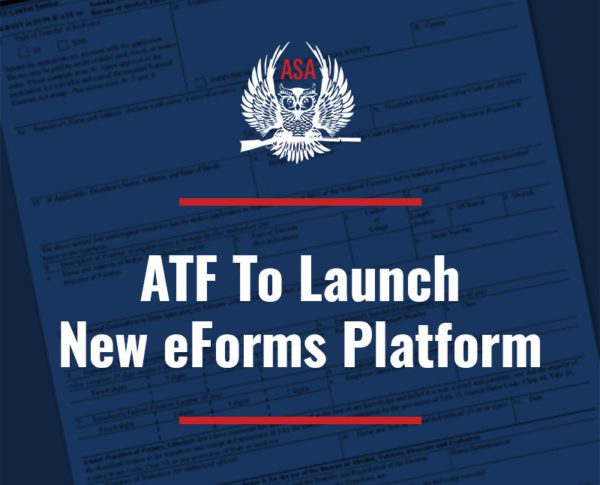 This report comes from the American Suppressor Association (ASA).
The Bureau of Alcohol, Tobacco, Firearms and Explosives (ATF) has announced the imminent launch of a new electronic system for NFA transfers. Known as the eForms system, this overdue modernization will allow consumers to submit both ATF Forms 1 and 4 electronically, hopefully resulting in a significant decrease in transfer times when compared to traditional paper Forms. This should speed up acquisition of firearm suppressors, since these require a Form 4.

According to ATF, the transition to the new system will occur sometime after December 15th, but before Christmas. The new eForms system will handle all existing NFA transfer forms, including the ATF Form 4, which is used for transfers of suppressors.

What is the NFA?
The National Firearms Act of 1934 (NFA) requires the Federal registration of fully-automatic firearms, of short-barreled rifles and shotguns, of rifles over .50 caliber, and of firearms sound suppressors (termed “silencers” under the NFA).

Do NOT Withdraw an Existing Form 4 Submission
If you recently submitted an NFA application, keep it in the queue. The ASA cannot stress this enough. Withdrawing your Form 4 and re-submitting electronically will take longer than allowing your Form 4 to make its way through the approval process. Withdrawing and re-submitting electronically will add months to your overall application process.

That’s because ATF isn’t going to dig through the tens of thousands of forms being processed to find your application. They’re going to wait until your Form 4 reaches an NFA examiner’s desk – the exact point at which it would normally be approved – to process your withdrawal. Instead of approving it though, they will acknowledge your withdrawal and release your serial number. You will not be able to re-submit an eForm 4 with the same serial number until ATF acknowledges your withdrawal and puts it back into your dealers’ inventory.

While traditional paper-based applications will remain a viable option, ASA recommends that suppressor buyers submit new NFA applications electronically. That’s because, if the new eForms system works as promised, it will increase efficiencies by reducing form submission and payment processing times, eliminating weeks of delays in data processing, and all but eradicating data entry errors.

The ASA plans to provide updated information about eForms as soon the ATF officially launches the new program for submitting ATF Forms 1 and 4 electronically. In the meantime, stay tuned by following the American Suppressor Association on Instagram, Facebook, and YouTube.

Judge Denies Defense Request for Mistrial – Law of Self Defense