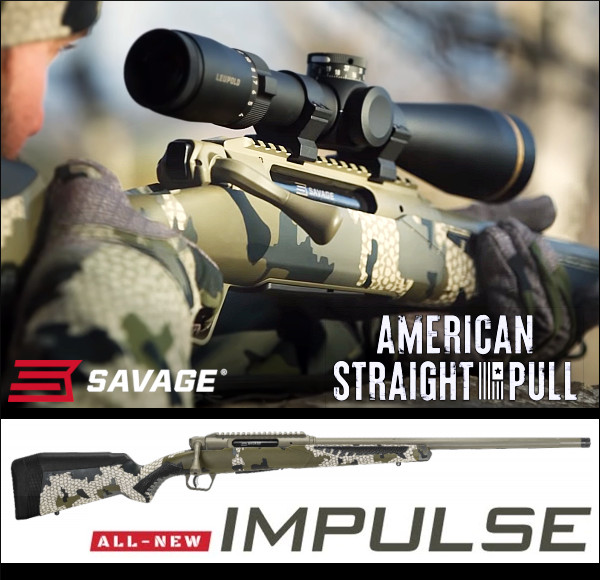 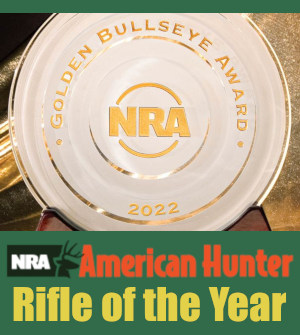 Savage Arms has won a second major award for its innovative Savage Impulse straight-pull hunting rifle. This is the only straight-pull centerfire rifle currently produced by a major U.S. manufacturer. The rifle has won the coveted NRA American Hunter 2022 Golden Bullseye Award as Rifle of the Year. Previously, Guns & Ammo magazine editors named Savage’s Impulse the 2021 Rifle of the Year.

“The new Savage Impulse is more than just a good first attempt at an American-made straight-pull,” wrote American Hunter magazine’s Associate Editor David Herman. “It is a rifle that can take long-range precision shots with ease, yet is in its element stacking lead in rapid fashion. It would make an excellent addition to any serious hunter’s arsenal.”

Beth Shimanski, Savage’s Marketing Director, says the design is a game-changer for hunters: “The speed of Impulse’s straight-pull action has changed the way Americans think about hunting rifles. This design combines everything Savage has learned about accuracy and reliability with innovation that provides marksmen and women with new capabilities with new capabilities.”

Savage’s Impulse series of straight-pull bolt rifles is the first American-designed and crafted straight-pull centerfire rifle. The new Impulse features an innovative Hexlock bolt-locking mechanism with six spherical bearings that move radially outward into a ring in the barrel extension, thereby locking the bolt in place. That barrel extension is held in the receiver assembly by four cross-bolts on the lower front section. Ahead of the barrel extension is a conventional recoil lug and a familiar Savage barrel nut.

Savage claims the new system offers the cycling speed of a semi-auto, with the accuracy of a bolt-action. However, based on the videos that Savage has posted, the cycling of the Impulse’s straight-pull bolt does not seem to be as smooth as some European straight-pulls, such as the Blaser R8, Merkel RX Helix, and Strasser RS 14. We’ve tried those Austrian/German rifles and you really can cycle them very smoothly. From the video the Savage Impulse appears to require somewhat more muscle and effort. Watch below. The video will launch at the 15-second mark for a comparison between the Impulse and a conventional Savage bolt-action:

Advantages of Straight-Pull Cycling System
What is the advantage of a straight-pull system? You should be able to cycle faster, and (ideally) maintain your cheek-weld and target view. Savage says: “The smooth bolt throw allows a shooter to cycle rounds intuitively, without the need for the standard four changes-of-direction common to a conventional bolt’s path-of-travel. Impulse reduces split times and allows a shooter to manipulate the bolt without losing [his] cheek weld. The bolt travels out and back and shooters don’t have to take their eyes off the target.” Sounds good, but if you watch the above videos, it’s not as wonderful as claimed. That said, if one slows down a bit, a straight pull should allow the shooter to maintain his cheek weld. 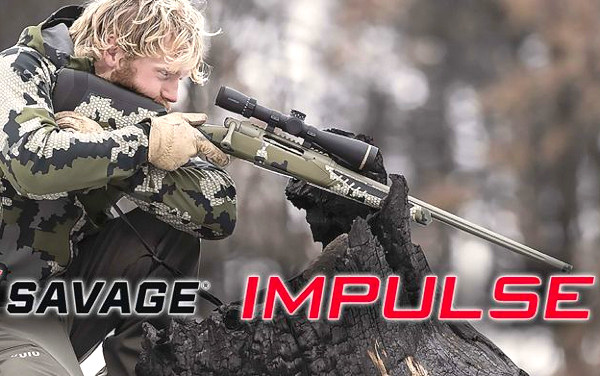 When the bolt is closed, the Hexlock system holds it in place instead of conventional lugs. With the Hexlock, six (6) hardened steel bearings lock the bolt in place inside the receiver’s barrel extension. Savage says “As pressure increases, Hexlock’s hold tightens, ensuring that there can be no rearward movement of the bolt. Once the round has left the barrel, the pressure subsides, and the action can safely open again with the straight pull of the bolt handle.”

The cleverly-designed, modular Impulse bolt can be disassembled without tools. And the bolt-handle can be moved to either side easily. Impulse barrels are connected via barrel extension which is held in the action/receiver by a lower-side four-bolt barrel clamp. 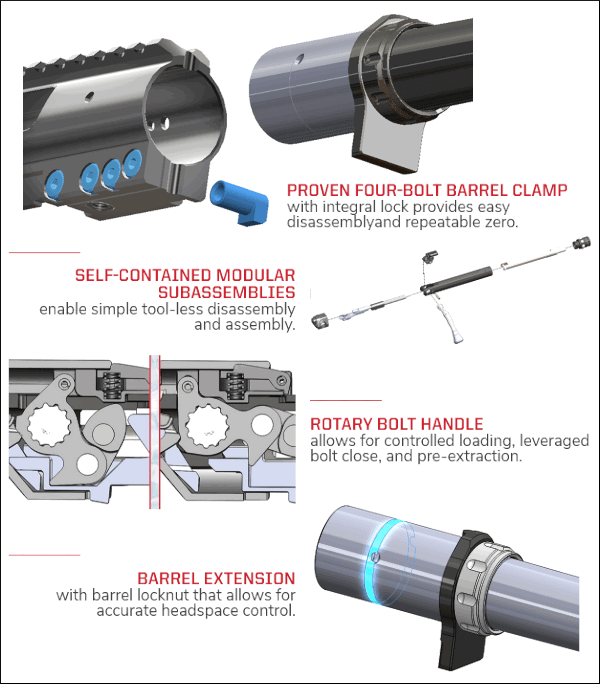